Social impact bonds: Are we reaching an inflection point?

Nearly a decade since the first social impact bond (SIB) was launched in the UK, the jury is still out on whether they are indeed an effective mechanism for driving social impact while achieving financial returns for those that invest in them.

SIBs, also referred to in development circles as Development Impact Bonds (DIBS), rely on an outcomes-based or pay-for-performance contracting model, where outcomes payments are made only when pre-agreed, verified social and/or environmental outcomes are achieved. Typically, SIBs involve an investor (or investors) who provides upfront working capital for the achievement of a specific social outcome, with these funds then channelled to service providers or a cohort of service providers (such as NGOs, non-profit social enterprises or for-profit organisations) through an intermediary that is responsible for overall management and administration of the SIB. When the service providers achieve the social outcomes, these are verified by an independent evaluator and only then does an outcomes payer (ideally government but this could also be a private donor) pay money back to the initial investor (either replacing capital or for a financial return). 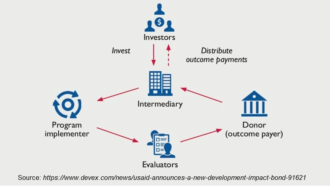 Figure 1: Mechanics of a typical SIB

With the attractive promise of rigor in delivery and measurement of social outcomes, as well as minimising risk associated with non-delivery and the potential for crowding in private capital with financial returns, it is no wonder that over 100 SIBs have been launched across the globe since they were first introduced. Despite their allure however, SIBs have been widely criticised as being overly complicated, too costly to set up, unclear on intellectual property (especially when for-profit service providers are involved) and difficult to scale.

As Tshikululu recently learned from an unsuccessful SIB created in South Africa, government procurement regulations can be a barrier, power dynamics between service providers and intermediaries adds complexity, and delays can ultimately lead to a complete breakdown of the entire structure.

Despite the various criticisms, SIBs continue to be considered an innovative financing model and conversations on impact investing are not complete without their mention.

At Tshikululu, we believe that learning and improvement lies in the doing, and oftentimes this means taking the road less travelled and leading the “social investment pack”. When it comes to SIBs in South Africa, our clients have done just that: from providing funding for intermediaries, to coming in as outcomes funders to play a pivotal role in de-risking investments to unlock the private capital needed for solving some of our most pressing social issues. Some of our clients have invested in SIBs that address early learning, youth unemployment and green outcomes. Tshikululu and some of our clients have been involved at some level with all three successfully launched SIBs in the country (as well as the SIB that failed to launch).

Examples of recently launched SIBs Tshikululu is involved in

An ECD SIB was launched successfully in early 2018, focusing on early learning outcomes. This SIB aims to improve the cognitive and socio-emotional development outcomes of over 2 000 children in two low-income communities in the Western Cape through a three-year home visiting programme.

2018 also saw the launch of the only SIB on the continent aimed at addressing youth unemployment. The SIB is currently being implemented as a four-year pilot aimed at transitioning 6 000 unemployed young people between the ages of 18 and 35 into high-quality entry level jobs. It also aims to enable a cohort of operators within the ecosystem and demonstrate a sustainable funding model for addressing youth unemployment at scale.

Both SIBs have drawn in a blend of impact investors with varying return expectations, as well as private and public sector outcomes funders. We are working on a third SIB with another client as well, which will hopefully be launched in 2019.

Finally, one of our clients has recently provided “anchor” outcomes funding towards a SIB that serves as an outcomes-based, de-risking mechanism aimed at incentivising local fund managers to invest in small and growing green businesses (SGBs). Once launched, it will run as a three-year pilot and will see grant funding being channelled through an intermediary to five local funds that will each provide matched-funding to green SGBs to produce pre-agreed outcomes across a range of green metrics. This SIB aims to catalyse the green ecosystem in South Africa and also attract a variety of foreign donors.

In conclusion, the SIB landscape in South Africa continues to grow and mature. Although SIBs should not be seen as a panacea for funding social interventions, the collective efforts made may just lead to an inflection point, where the pros outweigh the cons and SIBs become a sustainable mechanism for the delivery of social outcomes at scale.